Rome is not simply a large city, it is a huge city that is full of monuments, history and peculiarity. Rome is so big that even for locals it can be seemingly impossible to know every corner. Perhaps because of its history or  the creativity of city’s inhabitants. If you are tired of seeing the same touristic sites in the Eternal City? Here you can find some suggestions…

Recently, this is starting to be a point that is visited by tourists as well so it’s not that “rare” anymore but it still worth mentioning. Located near a picturesque location  “Giardino degli Aranci”, more precisely in Piazza dei Cavalieri di Malta, the keyhole is basically just a door. Wait ,wait, I can already imagine your expression: ‘What’s so special about a door?’ Well, if you see through this keyhole, you can see a beautiful view of the Saint Peter’s dome.

Not convinced at all? Here is a picture of ¨the door ¨, but really, seeing it in person will certainly make a difference 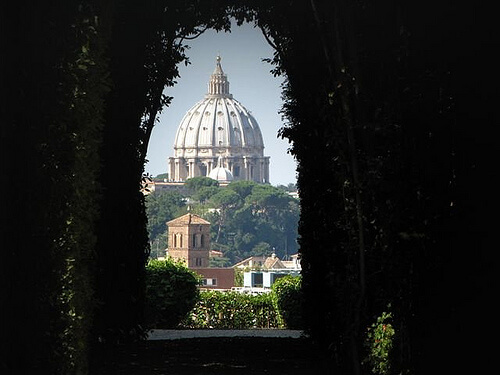 “Giardino degli Aranci” is said to be one of the most romantic places in Rome as you can enjoy a nice and unique view of the Circo Massimo and the city. In fact, it is usually full of couples, especially during Valentine’s day.

This very small district and it is not well know on a tourist map. The whole district is made up by just one small square. The interesting thing about the whole neighbourhood is the style of the buildings: they are built with the Liberty style which is named after the architect who guided is construction, Gino Coppedé, the square and the structures are examples of Art Nouveau, an art movement that took place at the beginning of the last century and spread throughout of Europe. In Italy, it is mainly known under the name of “Lo Stile Liberty” (“Liberty Style”). This neighbourhood gives you the some perspective about the style, and it was a popular choice for use in film sets for several high profile Italian directors and international directors alike such as, Dario Argento and Carlo Vanzina, Richard Donner. And if you need more reasons to visit, is really close to one of the best disco in town, the “Piper Club”.

Every day, at noon, the cannon stored inside Piazzale Giuseppe Garibaldi (also known by Gianicolo or Janicolo in english) shoots to symbolise the fact that it’s noon o’clock. Yes, no jokes: a shoot of cannon just to say ‘Hey everyone, it’s twelve o’clock’!This tradition was introduced by Pope Pio IX

n 1847 to have an unique sign of the time, different from the other litterally thousands bells of the various churches in the city. It was interrupted in WWII and, in 1959, it started shooting once again.

But that’s not all: once you get there, Janicolo’s terrace can also be a perfect occasion to see the whole Rome’s skyline all at once, and since we are talking about Janicolo, you might also be interested

If you ever happen to go to Janicolo, you might also be interested in walking a little bit further down from there and reach the terrace of Spain’s embassy, located in “Via Garibaldi”, in front of the

“Fontanone dell’Acqua Paola”. You’ll have the same landscape of the Janicolo’s but from a different angle. It is also in the same place where the first scene of the italian movie “The Great Beauty”, which won the Oscar in 2013, was shot. Since the movie by Sorrentino won the Oscar, this place has started to become familiar.

Located near “Via Ostiense”, lot of restaurants or discos but still, no one knows about the existance of this museum, even if it’s probably one of the finest you’ll find in town. This museum was the first power farm that“Acea” (the local power supplier) created back in 1912, this old power station is nowadays also an

ancient roman museum: within its halls, the exhibition is characterized by the intertwining images between classical archeology and industrial archeology , with the machinery of the plant as a backdrop to the sculptures or vice versa , according to the observation points inside the room . It is breathtaking as it feels as if there was once the presence of two giants and but now have became silent diesel engines. The originally supplied power plant were designed by Federico Tosi, one of the most important mechanical engineer

of the early 1900 in Italy, who worked really close to Ettore Maserati, the person who later went on to found the famed Maserati automaker.

Located in the “Tuscolana” neighbourhood, a little far from the center of the city but still within the subway range, it is a very large public park full of old roman aqueducts where the view from the park goes to the Castelli Romani . It is the residue of a stretch of Roman country that originally stretched uninterrupted to the Alban Hills , and is rich in arboreal vegetation , especially pines . It also includes a pond that flows from the aqueduct Felice and that creates a stream and a little waterfall. Aqueducts were a typical structure in the landscape of the ancient Rome: they were built

in order to bring portable water inside the city.The park was abandoned until 1970s, when a small group of locals decided to join forces to avoid the abandon of this place and revive its beauty

Garbatella might be called the “heart” of Rome: do you want to go somewhere in the Eternal City and hear typical roman dialect? Well, this is the place for you: within the various dialect that you can hear in town differentiated from foreign influences due to trade in the various other districts, Garbatella still possesses the purest traditions. From there, just get lost in Garbatella: this is the trick for this area. You just have to get lost and explore every alleyway that it has in store for you. It’s the best way. You’ll be plunged into what could be considered the remnants of what Rome used to look like one-two hundred years ago. 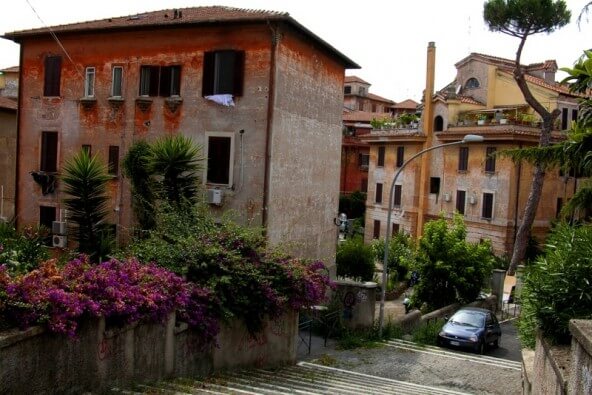 Garbatella was originally conceived in

1920 as a part of a bigger project which aimed to create a small harbour in the center of Rome. The project was eventually discarded but the construction of all the surrounding neighbourhood kept on, because during that period there was a strong economic development. The name was not set until 1930: in fact, Garbatella could also have been named as “Concordia” (the italian translation of “good willing”), but to honor the tradition of the neighborhood , the government chose to use the first, that stands for

The hidden domus is located in “Vicolo del Puttarello”, and it’s close by Trevi’s Fountain. The entrance, which costs only 3€, will grant you a trip to the discover of a domus (an ancient roman villa) and the rest of an aqueduct that has been brought back to light at the end of the last century.

Historians says that it was built during the Neronian Age (between 55 and 67 d.C.), an emperor who brought fear in Rome, and then changed into a domus during the fourth century. It is now a very small  museum but the exceptional conditions of the site allow you to see a glimpse of ancient life, and the name, “Remuria” stands for the ancient roman festivities celebrated on 9 , 11 and 13 May , to  exercise the spirits of the dead: the tradition tells that Romulus instituted this festival to appease the spirit of his brother Remus, that he killed.

In the heart of “Villa Borghese”, right next to the “Terrazza del Pincio”, from

where you can have a beautiful sight of “Piazza del Popolo”, lies a watch that was built in the XIX century and was entirely powered by water. Nowadays, the watch doesn’t work anymore but his unique design and the wonderful location in the park inside the “Villa”, really close to the center of the city, makes it a “must see”. The Water Clock was built between the 1867 and the 1872 and it was originally presented at the Paris Expo. It was brought back to “Villa Borghese” in 1873, where it is nowadays, where it receives more care with regular fixes, although its main function doesn’t seem to work properly anymore.

Last but not least, a little jewel from Rome: “Via Piccolomini”. What’s so special about this little street, you might ask? Let’s try to put in words: Essentially, the further you get from Saint Peter, the bigger it gets and the closer you get, the smaller it gets! A nice play on perspective due to the particular architecture of the buildings of the street that during the night reach

their peak, the perfect end for a romantic dinner in the close Trastevere district.